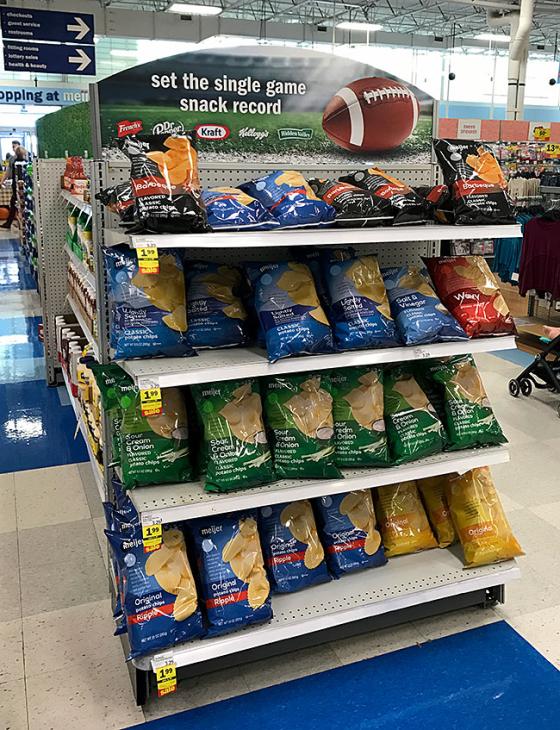 Meijer is activating its sponsorship of the National Collegiate Athletic Association's Big Ten Conference and teaming up with multiple CPGs to promote tailgating needs for football season.

A seasonal web page that changes leaderboard images based on what team a consumer selects links to e-commerce pages for grills and tableware while serving up "all star recipes" from partnering brands including Campbell Soup Co.'s Pace, Tyson Foods' Ball Park, Kraft Heinz Co.'s Oscar Meyer and Kellogg Co.'s Cheez-It. The page also positions Meijer's partnership with Shipt as a way to "deliver your tailgate groceries," touting that the service now includes beer, wine and spirits.

During September, the page also plugged an account-specific overlay to Dr Pepper Snapple Group's "Tuition Giveaway" contest, which activated the manufacturer's NCAA sponsorship. Consumers entered from Sept. 3-30 by texting a designated number. The account-specific sweepstakes awarded 15 winners with a $1,000 scholarship.

Meijer also partnered with Dr Pepper on a "Throw for Dough" sweeps that ran Nov. 5-18 on the mass merchant's Facebook page. The winner receives two tickets to the Big Ten football championship game in Indianapolis on Dec. 2, a $200 store gift card and the chance to compete for cash and additional gift cards by throwing a football into a shopping cart during the game. Nov. 7 Facebook and Twitter updates promoted the sweeps. Meijer has been running versions of Throw for Dough since 2014, though this is the first year it has enlisted a CPG partner.

Elsewhere in stores, Unilever spotlighted its NCAA sponsorship with floor clings offering $3 off a future purchase for mPerks members who purchased three SKUs from Dove, Axe, Degree, Vaseline or Suave from Oct. 8 to Nov. 4. Sponsored blog posts touted the incentive.

The Holidays Are Everywhere at Meijer

Meijer Wants to Be Teacher's Pet