Englewood Cliffs, N.J. — LG Electronics in July rolled out a wall display to nearly 400 Best Buy stores designed to help shoppers understand the benefits of new technology that is available with its televisions.

The wall display is the latest store-within-a-store experience to join Best Buy’s lengthy list of vendor shops, but LG vice president of marketing David VanderWaal promises the company’s offering stands apart. “We built our entire experience on what the shopper wasn’t getting in the store and what they would like to have,” he says.

So what exactly does LG say shoppers wanted from their store trip?

“And, they wanted to see it,” VanderWaal says. “They didn’t want to hear about it, they didn’t want an associate to tell them about it, they wanted to literally be able to see two different screens that showed them the exact same content played with these different technologies. So what we wanted to create for [Best Buy] in their stores was what we called the ‘Experience Wall’ where you could personally experience the picture that would be created with all this great new tech.”

LG and Best Buy began working on the display in mid-2015. Stretching across 16 or 24 feet of wall space, depending on the location, it showcases five TVs that previously were stocked in various places around the store. LG negotiated high-visibility placements in all locations to drive attention from as far away as 30 feet.

“We grouped some of these key televisions together to tell a more holistic story,” VanderWaal says. “It was a story that a shopper could utilize unassisted without a Blue Shirt [retail sales associate], and also assisted with Blue Shirts, because our research showed that, especially on browse missions, more than half of shoppers don’t want to engage the sales associate.”

The display was designed to offer different experiences for different shopper types and different trip missions. It is activated with a touchpad positioned in front of the televisions that the shopper uses to navigate to, for example, a split-screen showing the difference between 4K and 1080 content. But there also is a “magic button” for a Blue Shirt to utilize to access more videos for shoppers who would like to dive a lot deeper into how the technology actually works. Additionally, LG built into the experience the ability for shoppers to hear different sound bars that they can pair up with televisions.

When Shopper Marketing tested out the display in July at one store in Coon Rapids, Minnesota, the sound bar rollout was in the early phase and not all of the units were yet operational. To make identifying and troubleshooting such issues easier, the experience is built on a network-controlled server base that lets LG see all the displays from one location and make sure they are working correctly. The manufacturer can address issues with the store via phone or, if necessary, send out a representative within 24 hours.

“From an execution standpoint, that really works well,” VanderWaal says. “Also, it allows us to refresh the content as many times as we want since it’s all server-based.”

LG hopes to refresh the content from time to time and update it with new products and technologies as they emerge. Two West, Kansas City, Kansas, built out the content that currently plays on the screens, and Design Phase, Waukegan, Illinois, worked on the wall display.

Best Buy and LG hope shoppers will pay them back for the investment with value that they find in higher-priced televisions. ROI will be evaluated on sell-through as well as driving up average selling price.

“We worked alongside Best Buy from the early goings on this to make sure [the display] met the retail guidelines,” VanderWaal says. “Obviously they want to control what the experience is like storewide, so it was important that we had them working a parallel path with us as we built out the wall.”

Going forward, LG will roll out the display to key regional retailers that meet the company’s criteria of being high-volume stores with a higher income demographic base that have the linear footage available on a wall to host the experience.

Editor's Update: LG received the Design of the Times 2016 "Best of the Times" award for the wall display. 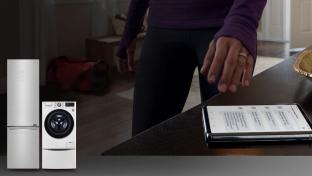 What Happens When Women Lead? Find Out at P2PX