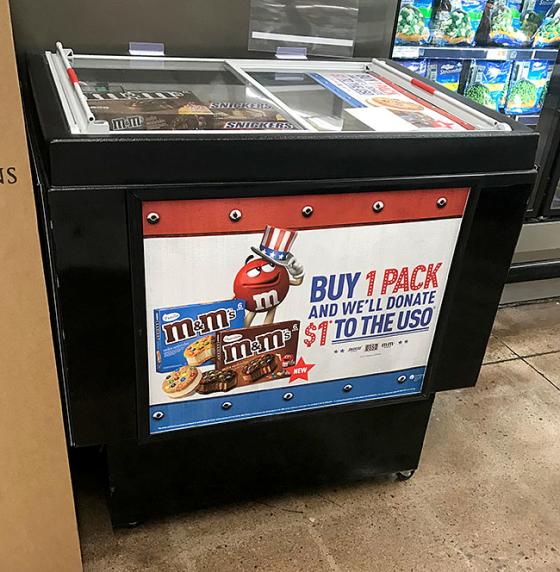 After three years of partnering with Coca-Cola Co. for a summer fundraiser for the USO (United Service Organizations), Kroger this year is instead getting help from Mars Inc.

The manufacturer has pledged to donate $1 to the nonprofit (up to $75,000) every time an eligible confectionery SKU is purchased at the retailer from May 1 to July 4. Secondary refrigerated displays stocking Snickers and M&M's frozen snacks tout the pledge along with new chocolate M&M's ice cream sandwiches. Floor clings depicting Skittles' "America Mix" also plug the contribution.

A "New Adventures in Candy" manufacturer showcase within each banner's website touts the campaign and hosts digital coupons for qualifying SKUs. Display ads on websites such as howstuffworks.com and Coupons.com support.

Mars' Extra previously ran a campaign benefiting the USO at Kroger that tied in to the observance of Veterans Day in November 2017. Developed by The Integer Group, the program led to a 42% increase in brand sales and won and Effie award.

Kroger has also pledged its own $1 million donation to the USO as part of its annual "Honoring Our Heroes" campaign. The retailer is promoting the program and its efforts to hire veterans through radio and TV spots, in-store stanchion signs, a video uploaded to YouTube on May 22 (see below), carousel ads on chain home pages, display ads on the websites of regional TV stations including WKRC-TV, run-of-press ads in newspapers including the Detroit Free Press and The Atlanta Journal-Constitution, and Facebook updates.

Cause Marketing/ Community Programs
Mars Gets Charitable at Dollar General

Dollar Stores
Dollar General Shares a Cause with Coke

Kroger Zeroes In on Causes