Walmart's Jet.com has partnered with retail storefront Story to open a pop-up store in New York City that underscores the impact of online behavior on offline sales, and vice versa.

Intended to showcase the Jet Fresh online grocery business the e-tailer launched before it was acquired by Walmart, the concept store sells a tightly curated mix of fresh produce and artisanal foods cross-merchandised with complimentary cooking ingredients, culinary tools and similarly themed merchandise from a variety of non-food categories including beauty, tech and home decor. 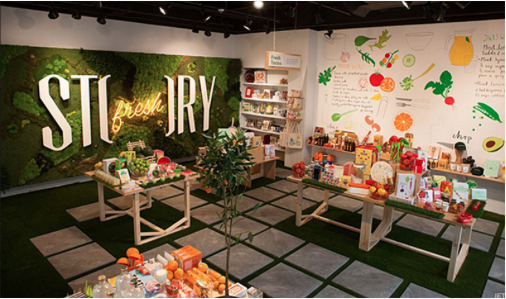 Some of the more innovative products include the Click n' Grow self-watering home garden, a cooler with a built-in blender and Bluetooth speaker, the Monogram Pizza Oven that serves up pies from scratch using Jet.com ingredients in just two minutes, and Sukeno sushi socks.

The store artfully displays the merchandise on themed tables. Custom details include a mural by local artist and food illustrator Claudia Pearson, cherry scratch-and-sniff wallpaper from Brooklyn-based Flavor Paper and a floor-to-ceiling installation of Jet shipping boxes. The store also will offer workshops and cooking classes with chef Mario Batali, makeup guru Bobbi Brown and the guys behind Hella Cocktail Co., among others. Jet's fresh ingredients are incorporated wherever possible.

Story is a 2,000-square-foot "start-up store" in Manhattan that merchandises a rotating lineup of merchandise that changes focus to a different theme, trend or idea every four to eight weeks. The Jet effort will run for a six-week period that began May 10 and concludes June 18.

"We enable big companies to be nimble like startups," Story founder Rachel Shechtman told Forbes, indicating that everything around the Jet collaboration came together in four weeks. The effort is designed to immerse the shopper in:

According to industry watcher Tushar Patel, chief marketing officer of omnichannel commerce platform Kibo, consumers are gravitating toward a more experiential retail buying journey. "Jet.com’s collaboration with Story to test the grocery space is yet another proof point of this trend and a further indication that retailers will continue to look to combine the best of brick-and-mortar with the latest technology tools. This will ultimately help retailers to win share of the market and evolve into what will be considered retail 2.0," Patel said in a statement.

However, Jet currently has no plans to expand its brick-and-mortar footprint beyond the temporary storefront, Mashable reported.