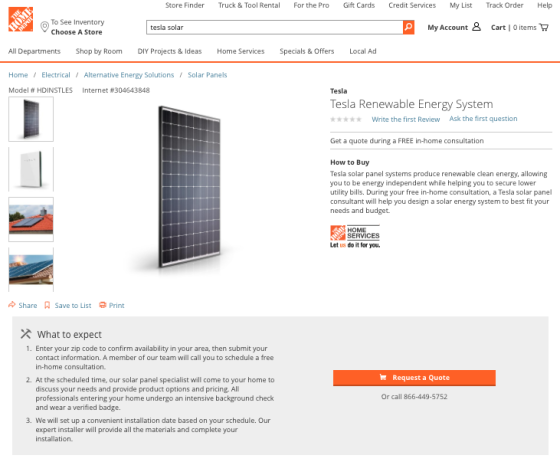 Tesla is rolling out manned kiosks at Home Depot stores as it begins selling residential rooftop solar panels and its energy-storing, rechargeable Powerwall battery via big-box, brick-and-mortar locations for the first time.

The Tesla-branded kiosks will be staffed by Tesla employees who will be able to give shoppers real-time rooftop solar and Powerwall storage recommendations using a home address and satellite imagery to estimate sunlight, shading and other rooftop factors, according to Fortune. Shoppers can then request a customized quote and schedule an on-site home consultation. The kiosks were recently installed in Home Depot stores throughout Southern California, Fortune reports, and will be available in stores in Las Vegas and Orlando, FL, this week. Tesla plans to expand to more than 800 of Home Depot's 1,977 U.S. locations this year.

A post on Home Depot's Built From Scratch blog spotlighted the partnership, sharing a video (see below) on how home solar panels and Powerwall batteries work and directing consumers to tesla.com to request a free in-home custom quote and consultation. A "Tesla Renewable Energy System" page within homedepot.com additionally allows shoppers to check if they live in an eligible area. A Feb. 1 Twitter update from Home Depot also supports.

According to Tesla's website, the average solar panel system generally costs $10,000 to $25,000. A Powerwall battery sells for about $6,200 with installation prices ranging from $800 to $2,000. However, the final design and price of the battery varies depending on the shopper's electrical panel, home energy usage and location preference.

Home Depot's partnership with Tesla does not currently include selling the manufacturer's much-anticipated solar roof tiles — which can only be ordered via tesla.com — though people familiar with the situation told Bloomberg that may happen at some point. The same sources told Bloomberg that channel rival Lowe’s has also been in discussions with Tesla about selling its solar products.

The hardware store chain had a previous relationship with solar panel company SolarCity, which Tesla acquired in 2016 and has since retired as a brand. SolarCity salespeople were positioned at some Home Depot locations to generate customer leads, but products themselves weren't on site, Bloomberg reported.

Best known for its electric cars, Tesla originally promoted its solar products in its car showrooms, but sales didn't meet projections, according to Curbed. The partnership with Home Depot lets the brand reach more people without going door-to-door like SolarCity did in its past.