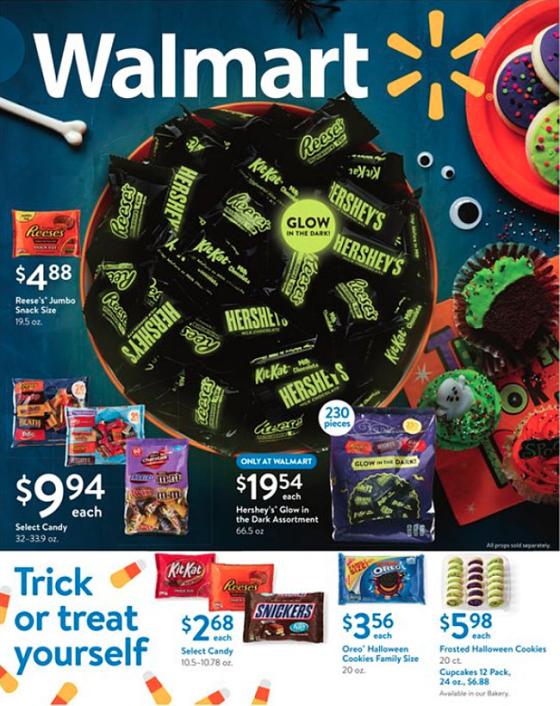 Hershey Co. was confectionery king at Walmart this Halloween season.

The manufacturer took the spotlight from last year's champion — Mars Inc. and its "booing" friends — by testing new glow-in-the-dark packaging exclusively at the mass merchant.

"We're not screaming from the rooftops, but we'll put it out there and watch the data," Hershey's chief sales officer Rob Gehring told Adweek.
The Hershey showcase delivered "ghoulish recipes" and e-commerce links to Hershey SKUs at the mass merchant — which in addition to the glow-in-the dark candies also spanned a multitude of other exclusive assortment packs.

Determining how to mix its candies and where to distribute them is one of Hershey's bigger challenges, vice president and general manager of brand commercialization Kristen Riggs told Adweek. Generally, "category killers" like Walmart and Target get the larger bags, while retailers like Dollar General get the smaller, lower-priced varieties. The mixes also vary by region.

Though Hershey didn't trumpet the glow-in-the-dark packaging inside stores, by deploying large pallet trains topped by a variety of tall, seasonal headers the manufacturer nevertheless commanded Action Alley in multiple locations visited by the Institute. The displays were heavy on the orange and purple, and augmented with standees, inflatables and other themed props. In additional fall-themed activity, a pallet side panel directed shoppers to the Reese's Pinterest account for a peanut butter cookie cups recipe.

Hershey also is involved in other sweet endeavors with Walmart as it seeks a permanent presence beyond the candy aisle.

The mass merchant has secured prime positioning on top of the retailer's gift card kiosk with exclusive, giant-sized "appreciation" and "greeting card" bars from Hershey's and Reese's.

Meanwhile, a celebration endcap full of eye-catching flare spotted in at least one store earlier this year supports the manufacturer's efforts to expand into the party aisle. Topping that presentation is a recently deployed, head-turning digital endcap spotted in one store hawking large-sized bags of product with movement, color and illumination in Action Alley.

The merchandising effort is especially important for the confectionery maker as the growth of e-commerce and rising popularity of healthier checkout offerings threatens impulse candy purchases.

The moves follow a different test conducted at Walmart last year as part of Hershey's pledge to minimize the environmental impact of its operations: redesigned display-ready cases that use 31% less corrugate. According to reports, the one-piece design eschews cover packaging, no longer requiring knives to be opened and saving store employees significant set-up time. It also eliminates the center divide for better presentation and boasts an enhanced print and digital design.