Food Lion Bulks Up on Madness

Food Lion Bulks Up on Madness 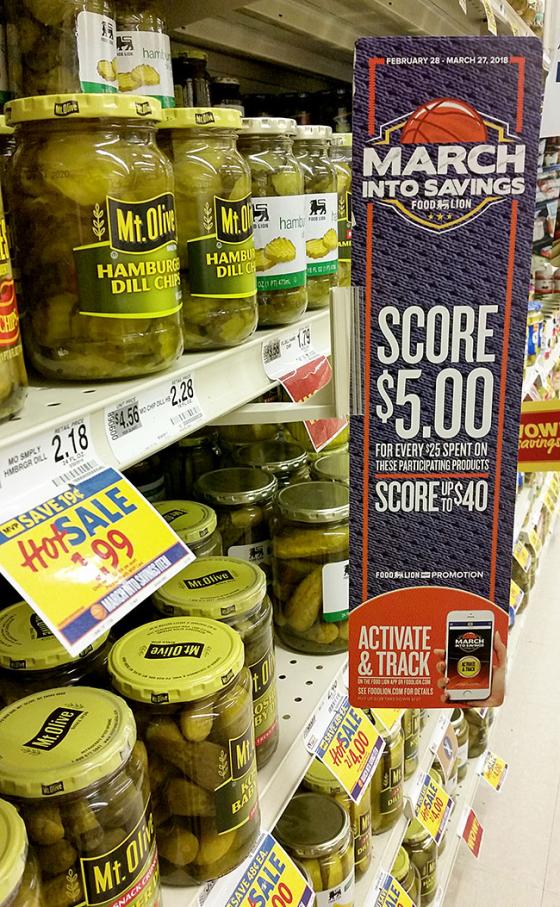 Ahold Delhaize's Food Lion tied in to the March Madness season by uniting dozens of brands for a "March into Savings" rewards program.

MVP loyalty cardholders who signed up for the program through the chain's website or mobile application earned $5 off a future receipt (up to $40) for every $25 spent between Feb. 28 and March 5 on products from eligible brands including Kellogg Co.'s Pop-Tarts, Kraft Heinz Co.'s Oscar Mayer, Unilever's Axe, General Mills' Pillsbury Grands and Nestle's Stouffer's. Endcap headers, violators, price signs and standees dispensing shopping lists promoted the program in stores. Radio spots, run-of-press ads in newspapers such as The Charlotte Post, circular features, a leaderboard ad on foodlion.com and email ads supported.

Elsewhere in stores, framed signs in the refrigerated foods department tied in to the season with a "bring home cheer worthy savings" theme while stanchion signs activated the chain's sponsorship of the Central Intercollegiate Athletic Association's women's basketball tournament and associated events from Feb. 26 to March 3 in Charlotte, NC. A feature in the digital version of the chain's Feb. 14 circular also promoted the sponsorship. Food Lion again pledged to donate five meals (up to 24,000) to food banks in the 12 communities surrounding CIAA schools for every social media post using the hashtag #BallinOnHunger made during the tournament. Facebook and Twitter updates promoted the campaign.

Food Lion also ran its annual "Meal Madness" cause campaign from March 12 to April 2 to distribute 125,000 meals as part of the chain's "Food Lion Feeds" cause platform. The effort pitted 30 area food banks against each other in a bracket-style tournament, with consumers voting through Facebook or Twitter by liking, sharing or commenting on designated posts to determine the winners of each round. All 30 participating nonprofits received a $100 donation, with prizes increasing up the ranks to $6,000 for the winner.