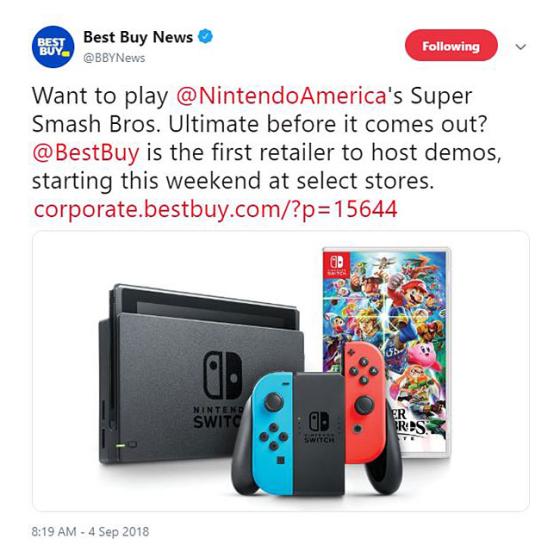 “Two separate experiences will provide attendees opportunities to sample Super Smash Bros. Ultimate in open gameplay and mini-exhibition formats where they will have a chance to win prizes," according to a Sept. 6 news release to My Nintendo loyalty members that also indicated they can check in with their My Nintendo QR code at the events to get a Super Smash Bros. Ultimate poster.

Nintendo helped promote the demos by reposting the aforementioned blog post on its own blog within nintendo.com on Sept. 9. Multiple Facebook and Twitter updates from Nintendo plugged the demos, while some also linked to a dedicated “Super Smash Bros. Ultimate Event at Best Buy” web page. Best Buy also leveraged Twitter to promote the demos.

Also ahead of the game’s launch, Best Buy dangled an exclusive Super Smash Bros. Ultimate collectible coin to shoppers who pre-ordered the game (the coin is still included free with purchase of the  eligible versions and bundles including the Super Smash Bros. Ultimate special edition). My Best Buy loyalty program members also received $10 in reward certificates for pre-ordering.

In addition, Best Buy opened over 600 stores at 12:01 a.m. Eastern time on Dec. 7, so gamers could “be one of the first to take [the game] home and play all night long," according to a Dec. 4 blog post from the retailer. On the day of the launch, an endcap display spotlighting the game was spotted at one Best Buy in Chicago stocking Super Smash Bros. Ultimate SKUs (though only a few were left) along with other games including Electronic Arts’ new Battlefield V.

Best Buy continues to promote the game and exclusive coins with animated display and top-of-the-page ads throughout its website, a dedicated Super Smash Bros. Ultimate e-commerce hub under its “Franchises” category, and multiple features in weekly circulars that have linked to an e-commerce page showcasing eligible versions of the game and offer details with a splash page. More recently, the retailer's Dec. 16 circular promoted the game and coins in conjunction with a $25 Best Buy gift card incentive awarded with purchase of a Nintendo Switch console.

Best Buy also commissioned a number of affiliate partners such as CBS Interactive’s GameSpot for editorials that linked to bestbuy.com. A Dec. 6 Facebook update and multiple Twitter updates from Best Buy also supported.

NOTE: Path to Purchase Institute members can view more images of new product launches from Best Buy at p2pi.org. Members also have access to more than 2,600 images and 300 articles of marketing and merchandising activity at Best Buy, along with a full Retailer Profile outlining the chain’s operations and strategies. 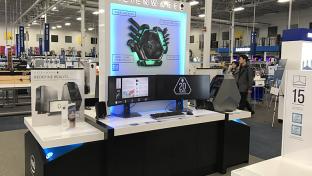