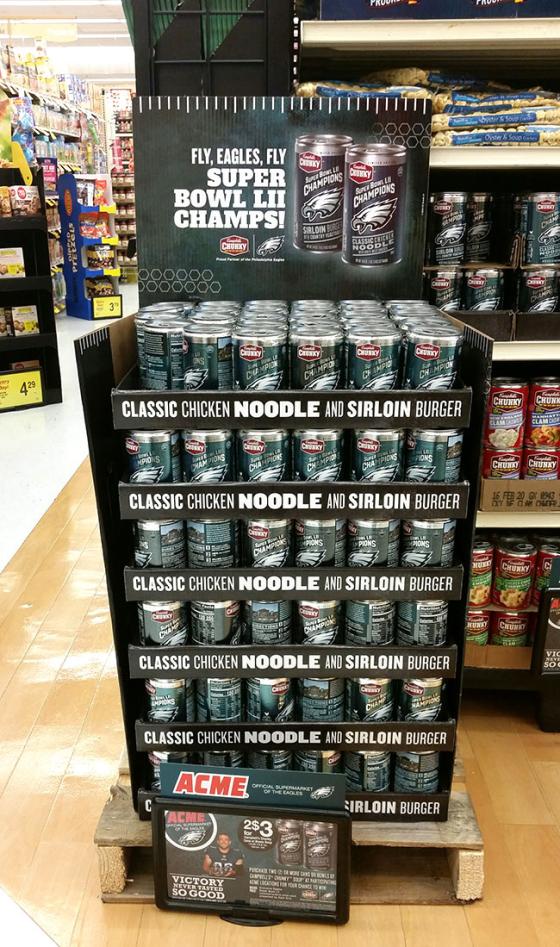 Albertsons Co.’s Acme is activating its partnership with the National Football League’s 2018 Super Bowl champions, the Philadelphia Eagles, for a multifaceted campaign engaging brands and targeting fans this season.

“We’re thrilled to be part of the Eagles’ Super Bowl celebration by offering fans moments and collectibles they can cherish forever,” Campbell’s Chunky marketing manager Jon Hopp said in a statement to various news outlets. “In teaming up with our friends at the Eagles and Acme Markets, we’re able to continue our commitment to giving back to the communities and rewarding fun-loving fans with a piece of football history.”

Acme shoppers entered the sweeps by purchasing two Campbell’s Chunky soup cans or microwavable bowls (excluding Chunky Maxx) in one transaction at participating stores and submitting a code found on receipts at philadelphiaeagles.com/chunky. Concurrently, Acme offered a “two for $3” deal on participating Campbell’s Chunky SKUs. In stores, violators and quarter pallets stocking the cans plugged the offer. A slew of Twitter updates from Acme, Campbell’s, the Eagles and Ertz supported.

Acme also joined forces with another fellow Eagles partner, Coca-Cola Co., to run an account-specific “Player-for-a-Day Experience” sweeps from Aug. 24 through Sept. 20, awarding one winner a grand prize comprised of:

Participants could enter once per day by texting “Acme” to a designated number or via cokeplaytowin.com/acme. Southfield, MI-based HelloWorld administered. Acme stores in Delaware, New Jersey and Pennsylvania (the states where the sweeps ran) plugged the sweeps via standees depicting Swoop, which were positioned near checkout.

In retailer-driven activity, Acme and the Eagles partnered for the fourth consecutive year to “Kick Hunger” and run a food drive benefitting Philadelphia-based nonprofit Coalition Against Hunger.

The duo is additionally running their annual “Swoop In & Win” and “Kickoff Kid” sweepstakes from Aug. 3 through Jan. 3, 2019 and Dec. 13, respectively. Shoppers that spend $10 on Acme’s “items of the week” earn an entry code (up to five) to use at one or both of the dedicated promotional sites (swoopinandin.com and acmekickoffkid.com).

As its done in the past, scads of Twitter updates, circular features, 30-second radio spots, and specially-marked shelf tags in stores promote eligible SKUs, which have so far included products from Mondelez International’s Nabisco, Utz Quality Foods, Kimberly-Clark’s Scott and Cottonelle, and Acme private labels Signature Select and Open Nature, to name a few. The same microsites from previous years (though revamped) and in-store ceiling signs also support the Swoop and Kickoff sweeps.

Prize offerings slightly evolved this year, with the Kids sweeps adding an eighth prize and the Swoop sweeps awarding a slew of prizes ranging from a pair of 2019 season tickets to the Eagles’ regular season home games, Acme and Eagles pro shop gift cards to autographed Eagles merchandise.

At the same time, most marketing materials for both sweeps additionally plug 5% off total purchases of at least $20 on Eagles game days to those wearing Eagles apparel. Separate support includes social media updates as well as in-store displays and signage including ceiling signs and standees depicting Swoop.

In other related activity, Acme plugged its private label Signature Select brand of chocolate chip cookies flaunting Eagles-themed packaging in bakery sections in stores as well as in circulars.