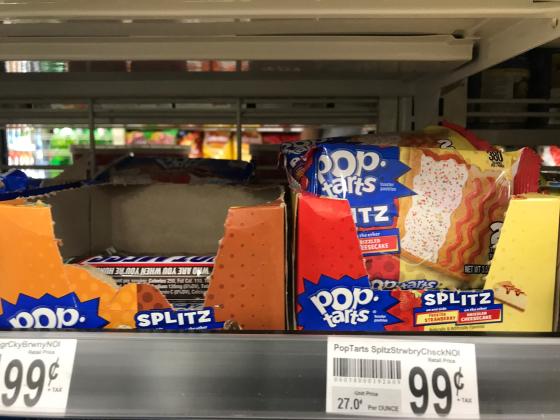 In stores, the SKUs are stocked on shelf trays positioned on endcaps and within aisles. Shelf signs positioned near the packages promise 7Rewards loyalty members a special discount with purchase of two Pop-Tart two-count packages through Aug. 28. An Aug. 8 back-to-school-themed email sent to Kellogg's Family Rewards members also supports, spotlighting the exclusive packages and encouraging shoppers to scan a playlist code found on in-store displays to get a Spotify "Mash-Up" mix.

Pop-Tarts Splitz first rolled out in 2007 but were discontinued in 2012, according to The Atlantic. The line relaunched nationally in May in eight-count boxes. The line's new flavors were selected after testing a range of concepts with thousands of teens and young adults (which are 7-Eleven’s core shopper demographic).

Convenience Stores
7-Eleven and Gatorade Embrace Both Types of Football